Why Search Your Judges Name before Your Hearing

We recently added to our website a very helpful section entitled Judge Search – https://www.thegoodlawgroup.com/judge-search/. The purpose of this is to give the public and our clients the ability to find out what percentage of time the Judge who presides over the Social Security hearing finds either partially or fully for the claimant.  Please realize that the Judges have quotas of cases they must complete in a year. You should also understand that the Judges are bound by the Social Security rules. Some Judges are fair and honest, and some judges are not.  You are really just hoping for a fair judge.

At the top of the page there are two search boxes. One for the judge’s name and the other one for the city the hearing office is in. 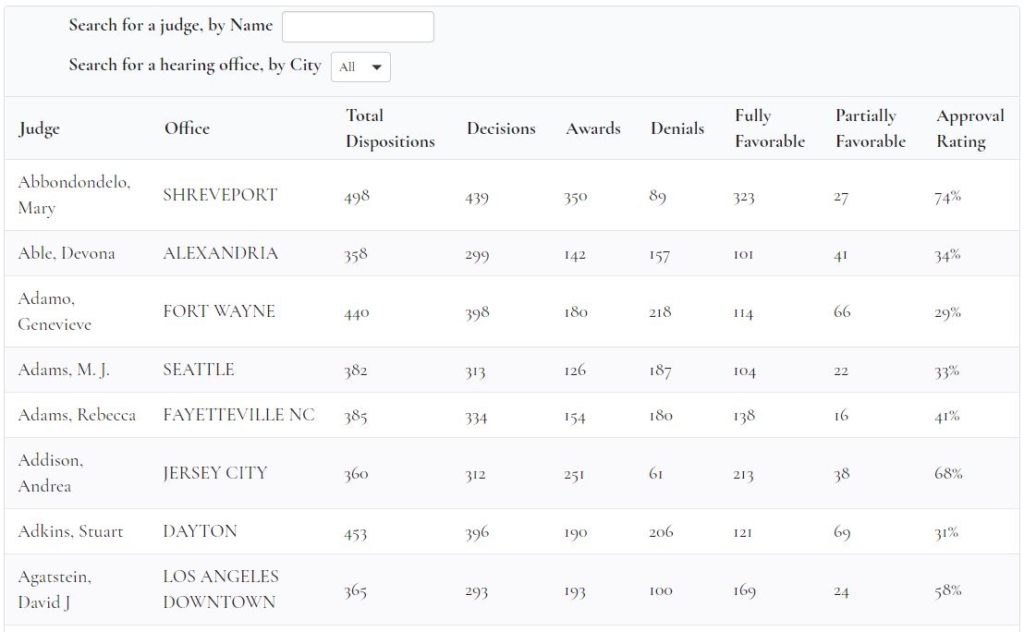 This page has 9 columns.

The first column has the Judges first and last name. There are about 1500 Judges. There are many judges with the same or similar names.

The second column tell what city they are in. So you must check and make sure that you have the correct name and city, before you look at the Judges statistics.

The third column entitled Total Dispositions, tells the number of dispositions so far that year. Our website updates every month. It is based on the data that the Social Security Administration publishes. If it is early in the year and a judge has only had 10 dispositions the percentages may be skewed because there is not a big enough sample size to accurately reflect the judge’s percentage. Total dispositions include all types of decisions including dismissals, like if somebody doesn’t show up for court or they missed a deadline.

The fourth column entitled Decisions, gives the number of written decisions the Judge has issued so far that year.

The sixth column entitled Denials, represents the number of cases the judge issued decisions where they denied the claimant’s entire claim.

The eighth columns entitled Partially Favorable decisions, gives the number of decisions where the judge awarded part of what the claimant was asking for. This could mean, they only paid the claimant for part of the time they wanted, this is called a closed period. Another type of Partially Favorable decision is when the Judge decides the onset of the disability is not what the claimant requested. So for example if the claimant said he became disabled in January of 2019 and the judge decided the claimant was disabled from the date of the hearing on. There are some judges who do this routinely. This allows them to deprive the claimant out of their back pay and can also deprive the attorney from getting paid out of the back pay.

To learn more about both types of partially favorable decisions, watch this short video.

When you search the city where the hearing office is, you can compare what the other judges do. There is a big difference in the judges who are around the 44 percent number and even 10 percent less. Remember the Judges all work for the Social Security administration. They have never fired a judge having too low of a percentage of Fully Favorable decisions.