How Many SSD Applications Are Approved for Benefits?

One of the most common questions applicants for Social Security Disability (SSD) benefits have is, “What is the likelihood that my application will be approved? The answer depends in part, of course, on the nature and extent of your disability. If your condition meets the Social Security Administration’s (SSA) criteria for one of more than 100 disabling conditions – which are considered the most severe cases – then the likelihood of your application being approved increases substantially.

If your condition meets the Social Security Administration’s (SSA) criteria for one of more than 100 disabling conditions – which are considered the most severe cases – then the likelihood of your application being approved increases substantially. The likelihood of approval also increases if you have proper medical documentation of your disability and its negative impact on your ability to work.

But generally, the SSA’s current approval rate is approximately 33%.1 That means for every 10 SSD applications submitted, only three of them will be approved for benefits. These numbers represent an overall downward trend in application approval over the past 15 years.

There are, however, a few caveats to these numbers. First, the percentage approval rating includes applications that were denied based on the applicant’s failure to pay into the system. In order to be eligible to receive SSDI, applicants must have worked a certain length of time during the period preceding their application. Known as the “duration of work” and “recent work” tests, the length of time, as well as the time period the applicant must have worked depends on his/her age. So the actual percentage of qualified applications that are approved may be slightly higher, though not significantly so.

Second, these numbers are the national average – approval ratings vary from state to state. But again, while your chances may be higher or lower depending on your state of residence, the differences are not enormous (you wouldn’t want to move to a more favorable state before applying to improve your chances of approval, for example).

If you look at the accompanying pie chart, you will see that not all of the approvals are made at the initial application level.2 Approximately 10% of all applications are approved during the appeals process, particularly at a hearing before the administrative law judge or appeals council. In fact, an applicant’s chances of being approved for benefits increases as you go up the appeals ladder. Appeals that make it to an administrative law hearing have an average approval rating of 65%.3.

So what can you do to increase the likelihood that your application for SSD benefits is approved? Whether you are at the initial application stage, or if your application has been denied and you have decided to appeal, you should consult with an experienced SSD attorney. An attorney who focuses solely on SSD benefits cases understands the criteria an applicant must meet to be considered disabled under the SSA’s rules, and can help you gather the appropriate medical documentation to support your claim. 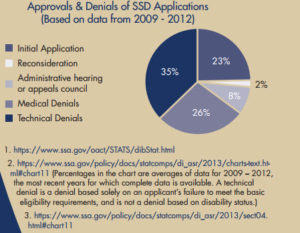 Have you applied for Social Security Disability Benefits or has your application been denied benefits? Consider the Law office of Neil H. Good for your representation. Call toll free #(847) 577-4476 or contact us online.